The Zeitgeist film series is a set of three documentary films created by Peter Joseph; Zeitgeist: The Movie, Zeitgeist: Addendum, and Zeitgeist: Moving Forward. This film series was used as the inspiration for The Zeitgeist Movement due to its popularity and overall message of seeking truth, peace, and sustainability in society. The end of the second film, Zeitgeist: Addendum, included a call to found a global movement. Despite these connections, the films remain a personal artistic expression of the filmmaker himself, not the official positions of the movement.

Released online on June 18, 2007, Zeitgeist: The Movie first attempts to rewrite the origins of Christianity, and then presents a number of conspiracy theories involving 9/11, the Federal Reserve, income tax, and one world government. The film received tens of millions of views on Google Video, YouTube, and Vimeo, and received almost universal condemnation from the media. 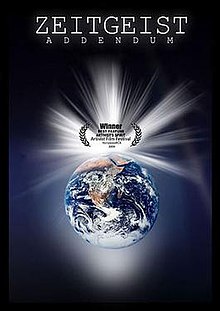 Zeitgeist: Addendum builds upon the topics of systemic social distortion and corruption and moves to present possible solutions. The film premiered at the Artivist Film Festival in Los Angeles on October 2, 2008 where it won best feature.

The film begins and ends with excerpts from a speech by Jiddu Krishnamurti. The remainder of the film is narrated by Peter Joseph and divided into four parts, which are prefaced by on-screen quotations from Krishnamurti, John Adams, Bernard Lietaer, and Thomas Paine, respectively.

Covers the process of fractional-reserve banking as illustrated in Modern Money Mechanics, by the Federal Reserve Bank of Chicago. The film suggests that society is manipulated into economic slavery through debt-based monetary policies by requiring individuals to submit for employment in order to pay off their debt.

Interview with John Perkins, author of Confessions of an Economic Hitman, who says he was involved in the subjugation of Latin American economies by multinational corporations and the United States government, including involvement in the overthrow of Latin American heads-of-state. Perkins sees the US as a corporatocracy, in which maximization of profits is the first priority.

Introduces futurist Jacque Fresco and The Venus Project and asserts a need to move away from current socioeconomic paradigms. Fresco states that capitalism perpetuates the conditions it claims to address, as problems are only solved if there is money to be made. The film looks at Fresco’s proposal of a resource-based economy, which puts environmental friendliness, sustainability and abundance as fundamental societal goals. He goes on to discuss technology which he sees as the primary driver of human advancement, and he describes politics as being unable to solve any problems.

Suggests that the primary reason for what the film sees as society’s social values (“warfare, corruption, oppressive laws, social stratification, irrelevant superstitions, environmental destruction, and a despotic, socially indifferent, profit oriented ruling class”) is a collective ignorance of “the emergent and symbiotic aspects of natural law”. The film advocates the following actions for achieving social change: boycotting of the most powerful banks in the Federal Reserve System, the major news networks, the military, energy corporations, all political systems; and joining, and supporting The Zeitgeist Movement. 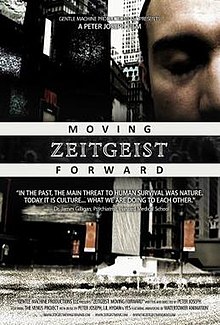 Zeitgeist: Moving Forward presents a case for a transition out of the current socioeconomic monetary paradigm which governs the entire world society. It premiered at the Artivist Film Festival in Los Angeles on January 15, 2011 and online. As of November 2014, the film received over 23 million views on YouTube.

Human behavior and the nature vs. nurture debate is discussed, which Robert Sapolsky refers to as a “false dichotomy.” Disease, criminal activity, and addictions are also discussed. The overall conclusion of Part I is that social environment and cultural conditioning play a large part in shaping human behavior.

John Locke and Adam Smith are discussed in regard to modern economics. The film critically questions the economic need for private property, money, and the inherent inequality between agents in the system. Also seen critically is the need for cyclical consumption in order to maintain market share, resulting in wasted resources and planned obsolescence. According to the movie, the current monetary system will result in default or hyperinflation at some future time.

As with Zeitgeist: Addendum, the film presents a “resource-based economy” as advocated by Jacque Fresco discussing how human civilization could start from a new beginning in relation to resource types, locations, quantities, to satisfy human demands; track the consumption and depletion of resources to regulate human demands and maintain the condition of the environment.

The current worldwide situation is described as disastrous. A case is presented that pollution, deforestation, climate change, overpopulation, and warfare are all created and perpetuated by the socioeconomic system. Various poverty statistics are shown that suggest a progressive worsening of world culture.

The final scene of the film shows a partial view of earth from space, followed by a sequence of superimposed statements; “This is your world”, “This is our world”, and “The revolution is now”.